“Alright. I guess that’s all.”

It’s been a little over half a month since Sky Demons attacked the southern territory of Mildiana in the Elberia Empire.

We, the students of the military academy, while taking classes at the academy, were often sent outside to help clear debris and repair buildings in the city.

The traces of the sky demons’ rampage still remain, but little by little, work is being done to restore the situation to its original state.

Looking around, I saw Roka running near the construction site, lifting large debris with ease. The fox beastkin girl was moving briskly as she continued her removal work.

“Roka ojou-chan. I always bother you.”

“No problem. It’s okay, we are both here to help those in need. Besides, schoolwork is boring and tedious. You need this kind of exercise to keep you going.”

“You’re a great girl, Roka-chan. …… Can you pass those words on to the white wolf girl who’s slacking off over there?”

She looked over and saw a wolf girl with pure white hair and skin talking to a girl who was also a student at the military school.

She was talking softly to her and had her hands around her waist. Perhaps she’s flirting on her. And it seems that the other party is also interested in it to a certain extent.

Well, Shaula is pretty and beautiful, so maybe it’s understandable that she would be.

Roka’s flying knee kick smashed into Shaula’s face, and the wolf girl was blown away by the momentum and crashed headfirst into a pile of rubble.

The girl who had been flirting on Shaula now walked away quickly.

“We still have a lot of work! Don’t skip and flirt on women!”

“Itaa …… ugh, today’s Roka is relentless from the early. So cute.”

Shaula brushed the pieces of debris away from her body and walked towards Roka.

“I was just flirting on a pretty girl, and you ruined it. Roka, will you take responsibility and let me hold you?”

“Don’t be creepy. Look, there’s still some rubble left. Let’s get back to work.”

“Don’t be so selfish. Or do you want to go back to classes at school? We’ve got magic classes all day today. It just prison!”

Shaula went back to her work, even though she was swearing a lot.

As Roka said, classes have now resumed at the military school.

It seems that today they will be lecturing on magic all day long. Probably they are doing that on purpose to increase the manpower for the repair work in the city.
.
Aside from students who good at magic, academy assigned beastkin like Roka and other students who are only interested in martial art and sword art to work.

It is supposed to be decided by the student’s free will, but a lecture on magic would be nothing but hell for those who are not interested in it, so it can be said that the psychology is well exploited.

There are times when the residents cooperate to serve food, which is quite tasty, so some people might be looking for a meal.

I, of course, help with the repairs.

There’s nothing more painful than sitting quietly listening to a low-level magic lesson. I’d rather be out there working like this.

I feel like battle with the sky demons has ignited a little fire in me.

I’m also curious about the identity of the Goddess, but I don’t think I’ll be able to get involved with them if I continue living at the school.

I wonder if I should accept Principal Ludo’s offer to graduate and become an officer now. The book that started it all for me, the one with the ancient script, was originally a test that he gave me.

Recent events have piqued my interest a bit and I have been preoccupied with it, but now that I had a lot of free time on my hands, maybe I should accept his offer to become an officer.

However, the war with the Zenan Dragon Kingdom was already over.

I have some feelings between those two countries. Is it a little awkward to fight voluntarily? No, but the aching in my body – the urge to destroy – doesn’t seem to be going away.

Unless there is a battle or something more exciting happens.

As I was absentmindedly thinking about this, the setting sun was already dazzling my eyes.

In the end, I just lazily helped with the reconstruction work and called it a day. It’s like this every day.

The only thing I can look forward to these days is flirting on Rena when I get back to the dorm.

No matter how much I hold her body, I never get tired of it. It makes me forget about time.

…… But then, it’s just like when I was in Tenebrae with Lumiere, isn’t it?

I’ve been in the Empire for a while now, so it might be a good idea to try holding another woman once in a while.

It would be nice to seduce Liz and make her a release after the two of us are alone.

It’s also not a bad idea to invite Roka over and forcefully r*pe her. If Shaula gets in the way, we might as well take her with us.

Well, I like my relationship with them to a certain extent, so I don’t feel comfortable destroying it.

That brave fox girl was looking at me with a melting expression. The wolf girl, who hates men so much, presses her body against her and seduces her.

All of these are wonderful sights, but it would be more fun to force them to become my objects than to do something as simple as that.

Black feelings swirl inside me. The reason I came to this country was originally a paroxysm of destructive impulses.

The series of incidents involving the Final Droplet was a good way to pass the time, and the battle against the demons was somewhat interesting. But that wasn’t enough to satisfy me.

I went back to the dorm thinking about it in agony.

Then I suddenly came back to my senses.

No, no, no. Asmo would laugh at me for doing this. No matter how much I can’t stop my destructive urges, I’m just as bad as her if I’m thinking about sexual things this much.

Asmo – Asmodeus is the majin of sexual desire and one of the seven pillars of royalty that support Tenebrae. She may look like a human girl, but the power she holds within her is incredible.

She’s the woman I’ve spent the most time with besides my beloved wives. What I spend my time doing is something I don’t need to explain, and I get lost in it for a few years.

At one point, I seriously considered taking her as my wife, but a lot of things happened and I decided not to talk about it.

I’d f*ck her if she was in front of me. Her power of fascination is so great that just being around her is amazing.

When I unlocked the door to my room and went inside, remembering the beautiful majin girl. “I’ve been waiting for you, my lord!”

Asmo was right in front of me.

What kind of joke is this?

Am I finally losing my mind because I have so much free time on my hands?

However, the girl with long pink hair and red eyes is definitely Asmo.

Asmo suddenly hugs me and stares at me with glazed eyes as she presses her ample breasts against my breastplate.

“Hmm. It’s wonderful, my dear. I’m sure you’re the best in your majin form, but I can’t help but think that your human form is just as cute. I love you. I want to hug you. I want to push you down. Aaah!”

Asmo’s lips sucked on my mouth.

It’s not a simple greeting, but a clearly excited one. Before I knew it, I was sucking on her lips like crazy.

Her lips slowly parted from mine, creating a silvery bridge.

I felt like I was going to collapse on the spot, but Asmo held me up.

The clothes that exposed her large breasts gave up their role as a fabric and lured my face into her soft breasts. 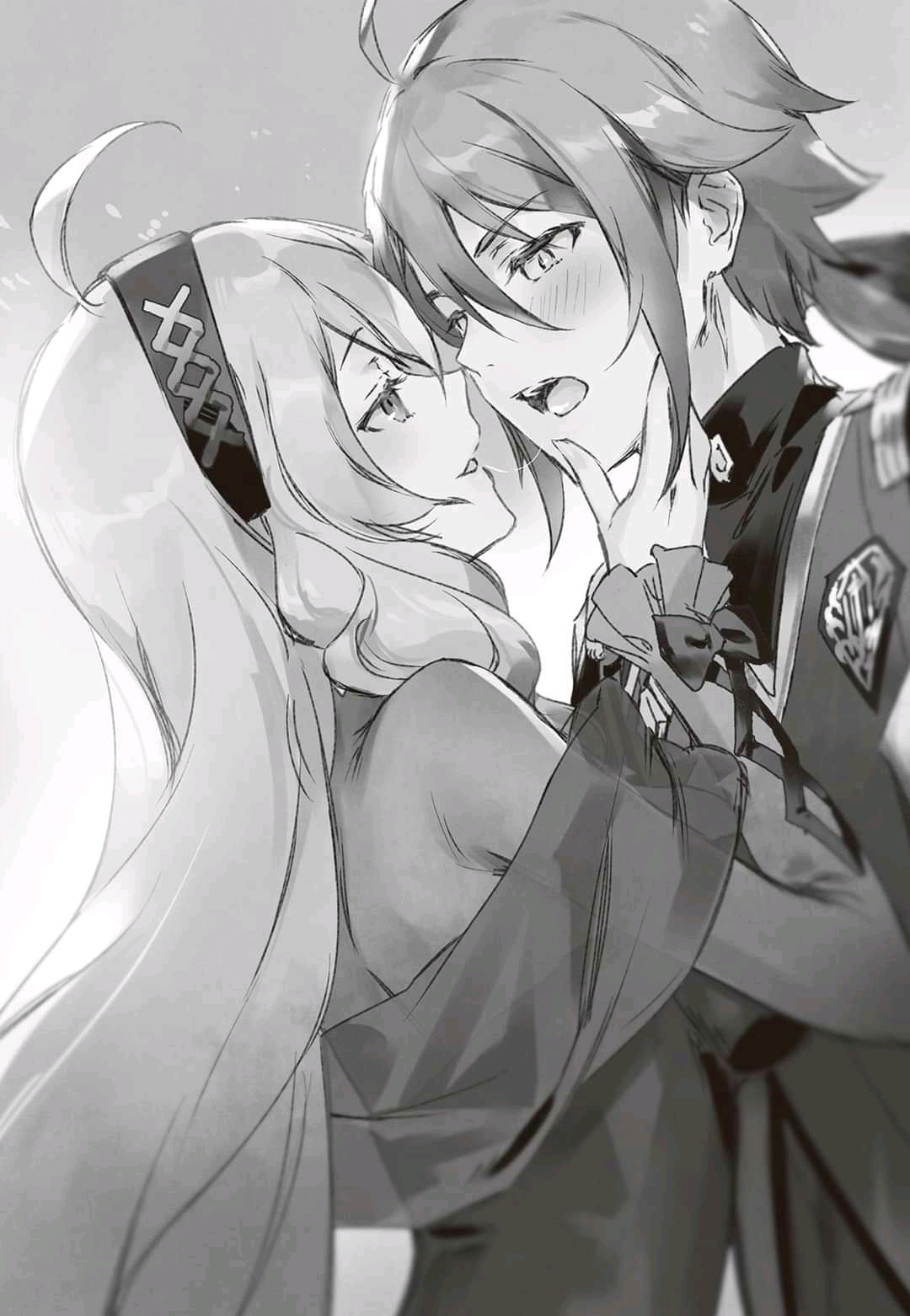 Rena’s breasts are big, but Asmo’s are almost as big or bigger.

On the lower half of her body, she was wearing a short, pure white skirt and long boots. The duality of obscenity and cuteness was quite wonderful.

For a while, I was forced to enjoy the dreamy feeling of being wrapped up in the softness of her buxom body, which I hadn’t tasted in a long time.